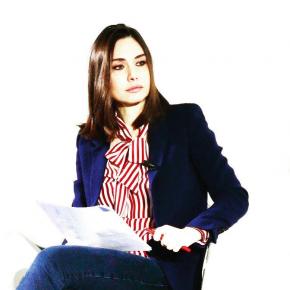 Journalist, former Editor in Chief of The New's Room Magazine and contributor to Corriere
Innovazione and Corriere Roma (Corriere Della Sera), TV reporter, documentary filmmaker,
content creator and blogger.
Author, host and curator of several format for TV national broadcasts (RAI, SkyTg24, La7)
with over 15 years of experience.
She is also events and debates speaker and moderator on topics such as future, innovation
in a cross-sector perspective in the various fields of human activities, innovative companies,
technology transfer, research and education and learning, young people and work,
advanced technologies, digital health, ethics of technologies and their social impact.
Among the recent projects she has signed, in the role of author and correspondent, the tv
show "CODICE", from 2017 aired in the second evening on Raiuno (the first channel of RAI)
dedicated to the investigation and popularization of exponential technologies, digital
disruption and their impact on the modern world.
He wrote and made the docufilm "THE SOCIAL STATE" produced by Ladybug
Entertainment for SkyTg24 italian news broadcast: an investigation on the 2018 Italian
elections according to the growing of political expression through social networks.
He hosted and wrote the third edition of the program "ITALIANA", produced by RAI for
global international distribution: six episodes to highlight the different territorial
excellences in the different production and development sectors between tradition and
innovation of Made in Italy.
In 2018 and 2019 she designed, wrote and presented a column on a tv magazine for the
private broadcast La7, interviewing SMBs, startups and companies active in the field of new
tech and digital, in order to make known and popularize the importance of the ongoing
Digital Transformation of the Italian productive system in the different industries.
She collaborates in the role of editor with several online publications on Tech, Digital and
Innovation and also collaborates, in the role of author and moderator, at FED Digital
Economy Forum, event dedicated to the discussion and deepening of the relationship
between real economy and digital economy held by Facebook Italy and Young
Entrepreneurs of National Italian Entrepreneurs Association.
Since 2016 she collaborated on a permanent way with the National Association of Italian
Entrepreneurs in the role of reportage author and director for social properties of the
Association and also as creative consultant of Brand Identity Division on institutional
events.
In 2017 and 2018 he held a weekly blog of live interviews on Facebook for the community
and the tech magazine "Startupitalia!".
The focus of his analyses, reflections and creative inspiration is the FUTURE expressed by
scientific-technological progress but in the sense of EVOLUTION in which the ethical
paradigm and the human factor can establish themselves as drivers of social and individual
development of the human being.
It is for these interests that in spring 2020, during the italian lockdown for global pandemy
of Covid-19, she co-created the KTrek Project (K stands for Knowledge): a new format of
interviews and talks on technological development issues and on the next future
developments.
A series of interviews, live talks, streaming debates and posts written on website
www.ktrek.vision and on Barbara Gasperini's social properties (LinkedIn, Twitter, Instagram,
Facebook and the YouTube channel KTrek).
It cooperates with EIIS - European Institute for Innovation & Sustainability - by creating
digital and sustainability publications web formats for corporates, professionals and people
in general who are interested in studying issues such as sustainability, the importance of
biodiversity, new technologies and innovation applied to different sectors of society.
For her communication activities in the tech and digital field, also in 2021 (as for several
years) she was included in the list of "Unstoppable Woman", a project born within the
newspaper Startupitalia starting from 150 women to follow in innovation in Italy: founders,
managers, activists, researchers, journalists and speakers who stand out for what they do.
Enterprising, courageous, talented women but above all hard workers who can be an
example to follow for many young people. Over time, “Unstoppable Women” has become
an editorial column and an extended community that grows every year thanks to meetings,
workshops and exchanges of ideas