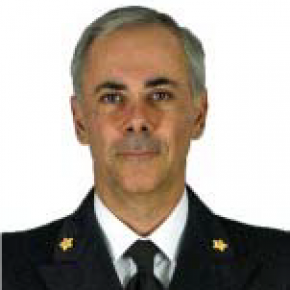 Deputy Commander of the Joint Command for Network Operations, Italy

Rear Admiral Giovanbattista RAIMONDI was born in Taranto, Italy.
He attended the Italian Naval Academy in Livorno, from 1984 to 1988, graduating in Maritime and Naval Sciences.
Rear Admiral Raimondi has completed a number of roles throughout his naval career, mainly related to C3 matters.
During the 1990s ha was the Telecommunications Officer on board Italian Navy Destroyer, ITS MIMBELLI, Commanding Officer of the Minehunter, ITS TERMOLI and Operation Officer on board Frigate, ITS GRECALE.
Between 1999-2000 he was appointed as the Chief of Telecommunications Division in the Italian Naval Operations Headquarters (CINCNAV), thus responsible for planning and management of operational comms of the fleet, and between 2005-2006 he was the Commanding Officer of Frigate ITS ALISEO.
Subsequently, from 2006-2007 he was assigned to the italian Navy General Staff as Chief of Telecommunications of the New Construction Division. At the same time he was double-hatted as Chief of the Net-centric Warfare Office of the C4 and Security Department. In these roles he followed the modernization programs of the navy.
From 2007 to 2010 he was appointed to the Italian Delegation to the Atlantic Council (R.I.C.A.), as the National C3 Board Permanent Representative.
From 19 October 2010 to 18 October 2012 he was appointed Chief of the Italian Navy Telecommunications Centre, in charge of C4 systems of the Navy.
From 2010 to 2016 he was designated as European defence community representative in the Technical Advisory Group on Maritime Surveillance of the European Commission. In this role he supported the activities led by the EC envisaged in the roadmap for the development and implementation of the Common Information Sharing Environment (CISE) on the Maritime domain of the EU.
In 2012 he was appointed as Chief of C4 and Security Division and Security Agency of the Italian Navy General Staff.
From September 2013 he assumed the role of Chief of the new Italian Navy C4 and Security Department in the Navy General Staff, where one of his major responsibilities was to develop and defend the NAVY info-structrure. In this period he had the responsibility to create the cyber defence structure of the Navy.
Promoted to Rear-Admiral in July 2015, he served at EUNAVFOR Somalia - OHQ "Operation Atalanta" - Deputy Commander in Nortwood – UK in January 2017.
On 04/09/2017 he assumed the position of Deputy Chief of the C4I Systems and Transformation Department of the Italian Defence Staff, taking the responsibility to develop the Defence network structure, communications satellite capabilities and international cooperation in the CIS activities.
Since March 16, 2020 he is Chief of the Security and Cyber Defence Department in the Joint Command for Network Operations, where he is responsible for the Cyber Defence activities, managing the Defence CERT (computer emergency response team) and developing new security architectures; in addition he is charged to direct classified Communication Information Systems.
From January 2022 is Deputy Commander of the Joint Command for Network Operations.
He attended the 5th Superior Course of Joint Staff (ISSMI) at the CASD, the 4th Joint Course for Legal Advisers in the Armed Forces, the "NATO CIS Officer Course” and the “NATO GENERALS, FLAG OFFICERS & AMBASSADORS’ COURSE”.
Rear Admiral Giovanbattista Raimondi is Officer of the Order of "Merit of the Italian Republic", decorated with the Mauritian Honor, the Bronze Medal for long navigation in the Navy, the Bronze Medal for "Long Command Merit", Gold Cross with star for "seniority of service", Ribbon of Merit for the service provided to the Navy General Staff, NATO Medal art. 5 “Active Endeavor” and “Atalanta European Union Naval Force” Medal.
Married to Stefania, they have two children, Edoardo and Anita.