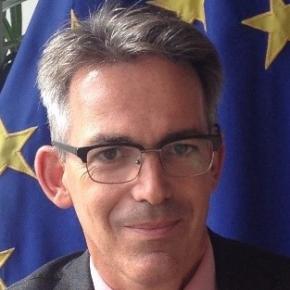 Since May 2016, Olivier Onidi is Deputy Director-General of the Directorate-General for Migration and Home Affairs (DG HOME) at the European Commission with particular responsibility over Schengen and Internal Security. In this capacity, he oversees the activities in the fields of Schengen, borders, information systems, innovation, terrorism and violent extremism, organized crime and cybersecurity. He also headed the Secretariat of the European Commission's Task Force for the Security Union. From March 2020 to June 2021, he was EU Anti-trafficking Coordinator. Since July 2021, he is also Counter-Terrorism Coordinator.

His last assignment was Deputy Director-General of DG HOME with the specific task to coordinate the Commission-wide work related to the Central Mediterranean Route in the context of the refugees’ crisis.

Previously, he was Director for the European Mobility Network within the Directorate-General for Mobility and Transport (DG MOVE), responsible for the development of the Trans-European Transport Network infrastructure, the implementation of the Connecting Europe Facility funding instrument and for the creation of a Single European Rail Area. Prior to this, he was Director for Innovative and Sustainable Mobility, in charge of transport security, clean and urban transport, intelligent transport systems and road safety.

Olivier Onidi also worked as Deputy Head of Cabinet of the Energy Commissioner, Mr Günther H. Oettinger, as Head of Unit for air transport services, aviation safety and environment and was Head of the Satellite Navigation System programme - GALILEO.

His first posts in the Commission were Assistant to Directors-General in the areas of Energy and Transport and External Relations. He then moved to the Secretariat General and afterwards became Member of Cabinet of the Commissioner for Research and Development, Innovation, Education and Training.

Before joining the Commission, Olivier Onidi worked as Adviser to the Executive Committee of Belgacom and as Public Policy Manager at American Express International.