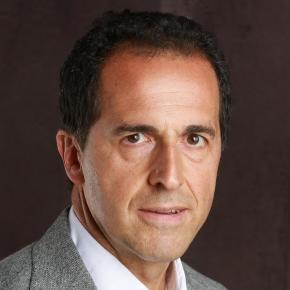 After graduating in Electronic Engineering at the Politecnico di Milano he began his career in 1991 as Head of ICT for Foreign Subsidiaries and then Industrial Controller for the International Division in a multinational engineering company in the Telecommunications sector.
From 1999, he coordinated innovation for digital appliances and services in a major household goods’ multinational, working also for two years in the US as the CEO of a home automation and safety spin-off.
He joined Finmeccanica in 2004 participating to the process that created the Group’s Services Company, with particular focus on ICT and on Procurement. He served as Group CIO until 2009, when he moved to one of the Group’s Companies with the role of VP Business Development and Marketing, that he maintained during several subsequent mergers within the Group. From 2014 he actively took part to the strategic process that led to the creation of the Division of Leonardo managing Cyber, Security and Digital solutions, where he was Sr. VP of Strategy & Technologies until 2019. From 2020 he leads the Strategic Intelligence and Analysis unit in Leonardo Corporate.
He is Chairman of the Board of the European Organization for Security (EOS), Vice-Chair of the Security Business Unit of the Aerospace, Defence and Security Association of Europe (ASD) and Head of the Work group on Cyber Security in Confindustria Digitale.