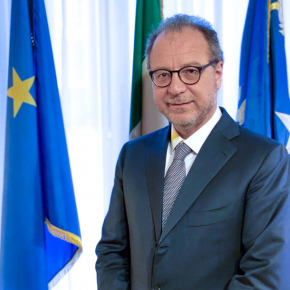 Undersecretary of State for Defence, Ministry of Defence, Italy

In March 2018, Mr. Mulè was elected as a member of the Chamber of Deputies of the Italian Republic in the 'Liguria 01 – Sanremo' uninominal constituency. He has served as a member of the Transportation, Postal Services and Telecommunications Committee; as parliamentary group leader in the Parliamentary Committee for the general direction and oversight of radio and television services. He has also been the sole spokesperson for the Forza Italia parliamentary groups in the Chamber of Deputies and Senate.

He was the promoter and rapporteur of the bill on "Provisions on the use of semi-automatic and automatic defibrillators in out-of-hospital settings" to protect the health of Italian citizens, which unanimously approved in the Chamber of Deputies on 30 July 2019.

He was the promoter and first signatory of the bill to establish the "National Memorial Day for the Victims of the Coronavirus Epidemic". The Chamber of Deputies unanimously approved the bill on 23 July 2020.

Mr. Mulè has led Forza Italia's Departments until his appointment as Undersecretary for Defence, and is a member of Forza Italia's Presidency Coordination Body.

In the course of his career as a journalist, he has held, inter alia, the following positions:

- Managing editor of "Panorama" magazine between September 2009 and January 2018;

- Managing editor of "Studio Aperto", a newscast at Mediaset between October 2007 and August 2009;

- Managing editor of "Videonews", a newscast at Mediaset between June 2006 and September 2007;

- Managing editor of "Economy", a monthly magazine published by Mondadori between November 2004 and May 2006;

- Editor-in-chief of the daily newspaper 'Il Giornale' between October 1992 and March 1998;

- Chronicler at the daily newspaper 'Il Giornale di Sicilia' between April 1989 and September 1992;

Throughout his career, Mr. Mulè has received numerous awards, including the "Ninni Cassarà" award in 2011 for anti-mafia commitment and the "Biagio Agnes" award in 2017 for innovation.

He has also held the position of Full Professor of 'Information Theory and Techniques' with three-year appointment leading to tenure.